India is the epicenter of human trafficking – Every 4 minutes, an innocent girl is kidnapped, bound, stripped of her virginity and forced into a life of prostitution. The United Nations has deemed India the most dangerous place in the world to be a girl. With 150,000 children per year sold into slavery, India now has 2-3 million prostitutes. Without a voice, without a choice, these girls are violently trafficked into the worlds largest sex ring. 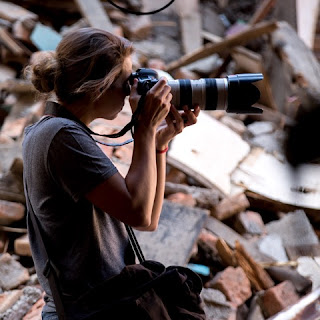 About Lindsay:
Photographer and adventurer Lindsay Daniels was born in Los Angeles County, California, before moving with her family to live her formidable years under the shadows of the Wasatch Mountains in Salt Lake City, Utah. She grew up with an insatiable appetite for exploring different peoples, cultures and lands, leading her to take degrees in Sociology and International Studies, respectively, as well as acquiring a minor in Arabic. During her time at University she had the opportunity to travel through most of Central Europe, as well as the Middle East, spending the majority of her time in Amman, Jordan. After concluding her studies, she went on to explore various parts of Asia, including Vietnam and Cambodia. This drive to explore the world is what sparked Lindsay’s passion for photography and story telling. Her most recent project took her all across the country of India and Nepal, joining forces with Effect International and the crew of Stolen Innocence to film a documentary on the ever-growing issue of sex trafficking.